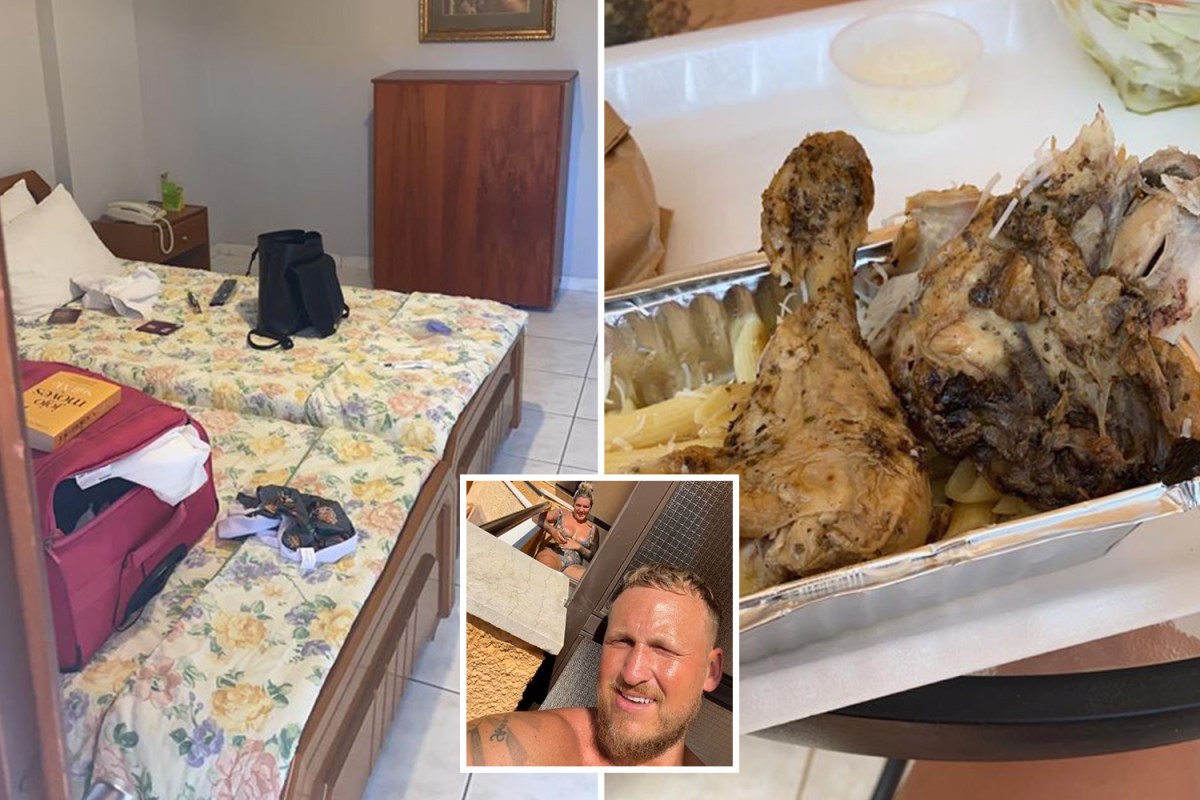 A BRIT COUPLE who was forced into self-quarantine after testing positive for coronavirus in Greece criticized TUI for sending them to a cockroach-infested isolation hotel, with no way to contact each other.

Upon arrival at the airport on August 3, they were both tested for the coronavirus and were told they would be contacted within 24 hours with the results.

After self-isolating on their first day and hearing nothing from the Greek authorities, the couple continued their vacation.

Yet on the fourth day, when they were due to leave by boat, Amy was contacted and said she had tested positive.

Her partner, Jamie, told Sun Online Travel: “On Friday, four days after our arrival, we were about to leave for a boat for the day, but at 9:30 am Amy’s phone rang from Athens. , saying she had tested positive.

“They ordered us to go back to the hotel room and said a doctor would then be there within the next few hours.”

After three and a half hours, a staff member came to the door, pointed at Amy and told her to follow her.

Jamie was asked to stay in the hotel room and was picked up an hour and a half later.

They were taken within half an hour to the Bintzan Inn, where they claim the hotel rooms contained cockroaches, wasp nests and ants, no internet and very little edible food.

Used car sales manager Jamie said, “When we got there they parked outside the block and just pointed to my room where the key was in the door. there was no explanation.

“We were given separate rooms next to each other. I was greeted by cockroaches and ant nests, and had to sleep with my tracksuit and a towel over my head as they crawled on. the bed.

“On the bed there was an envelope containing a letter indicating that all communication should be with the reception by e-mail.

“But then we had problems getting in touch with reception because there was no WiFi or signal there.”

The couple were not allowed to enter each other’s rooms and had difficulty keeping in touch due to the internet issues.

Jamie said: “When we were in the quarantine hotel, we had a little balcony where we could just see each other, but we couldn’t have a conversation, and there were wasp nests on either side of us so we couldn’t stay outside for long.

“Normally you would use FaceTime, but there was no signal. Amy found it really difficult.

“There was a TV in the room, but no English channels, so you couldn’t watch it, and the air conditioning didn’t work, even though it was 30 ° C.”

They also both struggled with the food, which was served to their doorstep three times a day.

Jamie added, “There was no choice in the food, and it was mostly pasta, bread and rice to fill us up.

“The chicken was black and the beef was full of fat. I was too scared to eat it because I thought it would make me sick.

“I didn’t eat for the first three days because I felt very bad. I asked if I could order something, and they let me pay € 8 for a pizza, but they left it out on a brick wall for me, and when I went out to pick it up, it was covered in wasps. “

After seven days, Jamie, who tested negative, was allowed to leave – but Amy had to stay in isolation for another seven days.

He continued, “It got more difficult when I left because I could barely talk to Amy.
“I had to pay for a separate hotel within 30 minutes, and they didn’t say why we were separated.

“They said if we stayed in the same rooms they would report us to the authorities.

“I asked for a retest, which we were happy to pay for when we got there, because I didn’t understand how positive it could be and I was negative when we were together all the time, but they refused . “

It was only after seven more days, 14 days after the two of them arrived, that they were able to return home, but only after paying € 220 for a second test and a Fit to Fly letter, as well as 420 € for the additional seven nights. Jamie stayed.

The pair have slammed TUI which claims to offer Covid protection, only for them to refuse to cover the costs.

Jamie warned, “When I got out of quarantine I spoke to the TUI rep who told us not to panic because everything would be covered as they would sort out hotels and flights.

“They were really pushing their TUI Covid protection so we thought we were in good hands.

“They promised to cover our extra hotel stays, our tests, all that.

“However, the day before I left my quarantine, they said the hotel would not be covered because the hotels would not accept me because they knew I had been isolated.”

The pair were left out, as well as mentally and physically exhausted from their experience.

He continued, “Amy remained so upset. It took about five days for her to recover since she was not herself.

“It’s hard to explain what it does to you when you’re trapped in a room, unable to eat, it exhausts you mentally and physically.”

He added: “I would never book with TUI again. They said they would refund the Fit to Fly, but they didn’t.

“I had never booked with them before, but I chose this time around because of their Covid protection.

“I wouldn’t go overseas until there is no vaccine. We love our vacations, we go probably eight times a year and we had been to Ibiza before that which was great.

“Since then we have told our friends and family about what happened, and it turned off a lot of them, and a lot of them canceled their own trips. “

A spokesperson for TUI told Sun Online Travel: “We are sorry to hear that these customers were not happy with their experience.

“When we contacted the client directly, he let us know that his concern was that his insurer was not covering the covid-19 test he had to pass before returning home.

“We helped the client and reimbursed the cost of the covid-19 test.”