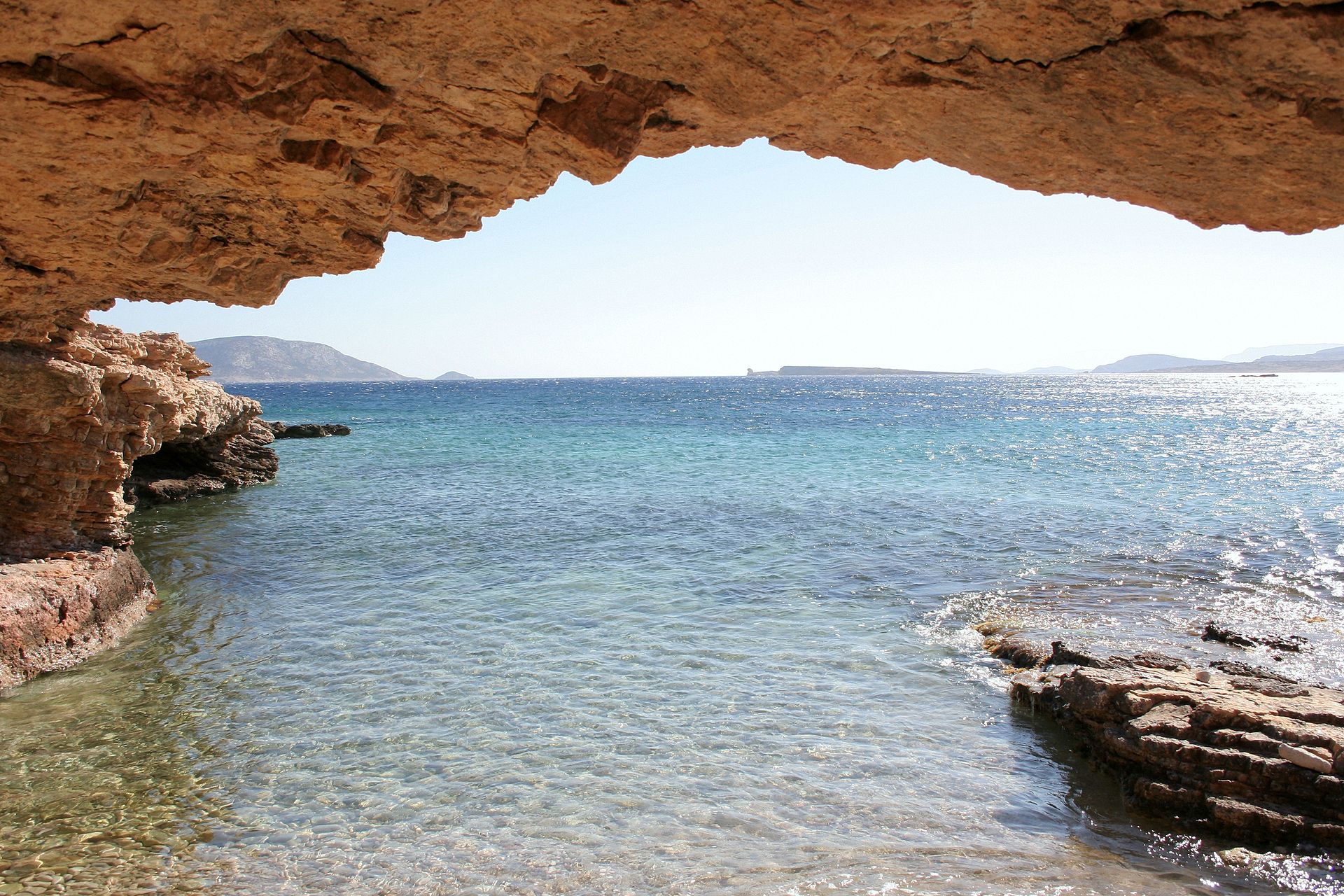 The islands of Koufonisia have often been described as Greece’s hidden paradise and they remain a top destination for Greek and foreign tourists.

Koufonisia is a group of islands belonging to the Eastern Cyclades archipelago, consisting of Pano Koufonisi (Haut Koufonisi) and Kato Koufonisi (Bas Koufonisi).

These idyllic islands are known for their calm beaches with golden sands and turquoise waters, their many natural pools and magnificent sea caves.

Of course, there are many excellent dining choices with plenty of fresh island fish and seafood.

La Chora (the center or main village of an island) of Koufonisi is a typical Cycladic village with quaint streets, pristine white houses and a white windmill. In the center of the village is a church dedicated to Saint George, patron saint of Koufonisia.

The islands also offer excellent opportunities for hiking and discovering all the natural pleasures they have to offer, as they are quite small and all distances can be covered on foot in two or three hours.

The locals are famous for their good humor as well as their hospitality, and all visitors feel right at home when they are in the Koufonisia Islands.

The island’s traditional products of course include their fresh fish and seafood, but there is also ibex meat (a type of goat) and ksinomyzithra cheese to enjoy while you’re at it.

Tourists can also use the small boats that regularly connect the Chora to secluded beaches and neighboring islands, and go scuba diving or snorkeling in the sparkling turquoise waters surrounding the chain of islands.

Keros was a major ancient site

The neighboring island of Keros is well worth mentioning since the small uninhabited island was once one of the main centers of Cycladic civilization.

Important archaeological finds were discovered there in an ancient Cycladic cemetery, including 100 marble figurines, some of which are now on display in the Archaeological Museum of Athens.

Gála Beach is a largely unrecognized beach on Ano Koufonissi.

Many people know the three islands known as Koufonissia (Ano Koufonissi, Kato Koufonissi and Keros) for their spectacular beaches and unspoiled naturalness, as they are mostly off the radar screen of mass tourism.

Even fewer have heard of Gála Beach, a true miracle of nature, which offers a rare sight due to its unique geomorphology.

Gála Beach is made up of a huge whitewashed boulder that the waters of the Aegean Sea have sculpted into intriguing shapes over the centuries.

This natural rock sculpture has created a small beach even inside the rock, creating a kind of natural “pool”, which takes on some of the most spectacular colors, depending on the weather and the sunlight.

The waves crashing on the outer side of the cliff somehow manage to pass underneath, and they cross it on the other side, forming a pool full of seawater surrounded by the ” rocky walls of the land of the island.

Due to the area’s white sand and the color of the rock, the water entering this natural pool sometimes takes on a pearly, shimmering hue that also resembles the color of milk.

This is why the beach is called Gála, because “gála” (in) in Greek means “milk”.
Gala Beach can be found on foot, near Pori Beach, and if he is lucky enough to find it without other visitors, then the experience is guaranteed to be unique and completely unforgettable!