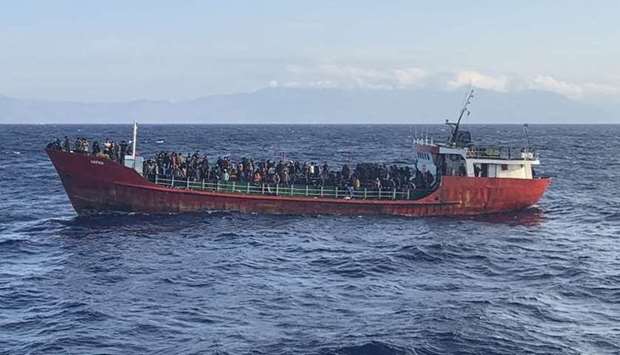 Nearly 400 migrants disembarked on Sunday from a Turkish-flagged freighter that Greece allowed to dock in its territory despite accusations that Turkey had violated a migrant agreement.

The ship had sent a distress signal Friday after the failure of its engines in international waters, according to the Greek authorities who authorized it to dock on the island of Kos, in the south-eastern Aegean Sea.

The Greek coast guard said the migrants had been transported to a reception center on the island as reports indicated that experts from the Ministry of Health would quarantine them and test them for the coronavirus.

The Migration Ministry said nearly 400 people had disembarked from the ship, including six detained for questioning, but did not immediately state their nationality.

The Athens news agency reported that Greece’s migration and maritime transport ministers, as well as the European Commission, had contacted Turkish authorities to ask them to take back the ship, but to no avail.

“Turkey has once again failed in its responsibilities to the EU,” Merchant Marine Minister Giannis Plakiotakis said on Saturday.

The European Union and Ankara signed an agreement in March 2016 according to which Turkey was to sharply reduce the flow of migrants through its territory to EU countries, Bulgaria and Greece, in exchange for billions of euros in ‘financial aid.

Greece and Turkey have accused each other of breaking the sealed deal after more than a million migrants and asylum seekers, many from the civil war in Syria, entered the EU in 2015.

Plakiotakis said Turkey “will not accept the return of the Turkish flagged vessel which left a Turkish port”.

He added that the ship had set sail “obviously with the knowledge of the Turkish Coast Guard and (Turkey) continues to have no respect for human life”.

The Greek islands of the Eastern Aegean Sea are the EU’s first stopover for waves of migrants and asylum seekers coming via Turkey.

On Tuesday, four migrants, including two children, drowned after a boat sank off the island of Chios. The boat was carrying 27 African migrants when it capsized and sank.

The ship had left Turkey amid high winds, and none of the occupants had received a life jacket from the smugglers, the Greek coast guard said in a statement.