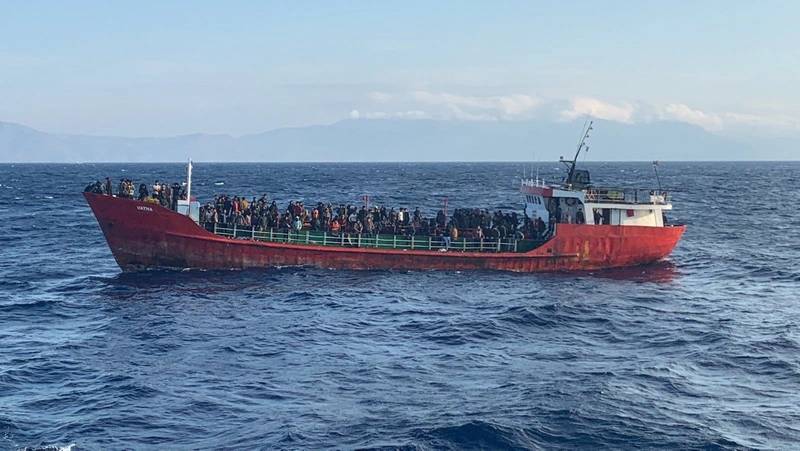 Greece is currently in talks with Pakistan and Bangladesh in hopes of finding a way for migrants from both countries to return home after a cargo ship they were traveling on was docked at the port of Kos on Friday.

Greece’s Migration Ministry said migrants were “not entitled to asylum” in the country and would like to find a way for them to return home safely in collaboration with their country of origin. The freighter contained 381 migrants, including 250 from Pakistan and Bangladesh.

The Turkish-flagged vessel, known as Murat 729, ceased sailing off the coast of Crete after its engines failed and was then towed by the Greek Coast Guard to the port of Kos. The ship was allowed to dock in Greek territory despite accusations that Turkey had violated a migrant agreement.

Greek Migration Minister Notis Mitarakis posted on Twitter on Monday: “A double effort is underway. We need to come to an agreement with the countries of origin so that the majority of those on board the ship that left Turkey and arrived in Kos due to damage return to Pakisan and Bangladesh.

“Turkey has once again failed in its responsibilities to the EU,” Merchant Marine Minister Giannis Plakiotakis said on Saturday.

The European Union and Ankara signed an agreement in March 2016 according to which Turkey was to sharply reduce the flow of migrants through its territory to EU countries, Bulgaria and Greece, in exchange for billions of euros in ‘financial aid.

Greece and Turkey have accused each other of breaking the sealed deal after more than a million migrants and asylum seekers, many from the civil war in Syria, entered the EU in 2015.

Plakiotakis said Turkey “will not accept the return of the Turkish-flagged vessel which left a Turkish port”.

He added that the ship had set sail “obviously with the knowledge of the Turkish Coast Guard and (Turkey) continues to have no respect for human life”.

The Greek islands of the Eastern Aegean Sea are the EU’s first stopover for waves of migrants and asylum seekers coming via Turkey.

On Tuesday, four migrants, including two children, drowned after a boat sank off the island of Chios. The boat was carrying 27 African migrants when it capsized and sank.

The ship had left Turkey in a strong wind and none of the occupants had received life jackets from the smugglers, the Greek coast guard said in a statement.